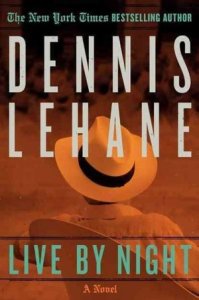 What’s it about?
Mobsters in the 1920s. The story starts during Prohibition in Boston. Joe Coughlin, the son a Boston Police Captain, makes a career of breaking the laws his father enforces and is becoming deeply entrenched in organized crime. One day Joe and his two buddies rob a Albert White’s (a rival mob boss’s) gambling room where Joe meets the beautiful Emma Gould. Emma is involved with Albert but begins an affair with Joe, obviously.

One thing leads to another and Joe finds himself in Tampa, Florida. He becomes involved in the crime ring there and builds his own (very) successful business. In Tampa, he meets the beautiful Graciella Corrales. Joe finds trouble in old mob bosses, the government, local spiritual leaders and his own love life.

What did you think?
I liked but not as much as I hoped to. Boston and old school gangsters are two of my favorite so I thought this would the perfect book for me when I first heard about it. But part of my disappoint lies in how little of the book actually takes place in Boston. While Boston is Joe’s home, the plot quickly moves into Florida and remains there for most of the story. Nothing against Tampa, I just like everything better when it’s happening in Boston.

Overall I liked but wasn’t blown away. The plot was a little slow in some parts for taste, not something I would call a “page-turner.” I was easily able to put it down and sometimes forgot about it for a while, but when I did pick it up I was interested and was never completely bored by the story– just never completely hooked either. This is one of the few books that I think will have a better movie counterpart. Since movies always have to cut out parts of the book anyway, I think I’ll like watching only the best and most exciting parts of the story on screen rather than reading the whole thing. I’m basically hoping the the movie is a “Best of Live By Night.” Also the movie will have Ben Affleck and Zoe Saldana so it’s a win.

Should I read it?
I don’t think it’s for everyone. If you’re really in crime/the mob then I would definitely recommend. If not, I hate to say it but i might just wait for the movie. 😳

Here’s the Live By Night trailer.

I Never Had It Made
by Jackie Robinson
tagged: currently-reading

Sharing is caring
When you're walking to work and you find a book with a note "Free" on it, you know it's going to be a good day🚶🏽📚👍🏽 - #books #bookstagram #bookworm #bookdragon #igbooks #booklover #fridayfinds
A Song of Ice and Fire/Game of Thrones is one of the best book/TV series that will break your heart and ruin your life. #currentlyreading #gameofthrones #asongoficeandfire #astormofswords #books #bookstagram #jonsnow #ghost #igreads #bookworm #bookdragon #bookish #bibliophile #bookaddict #booklover

Books and Series I Love

It's In The Details

Living At 24 Frames Per Second

Literary Homicide with TropicalMary
A World of Weird

Books Chase Away the Blues

and they were spoken

Head in the Clouds, Heart in the Books

Dreaming and reading through life

Thoughts of a twenty-something film fan, reader and geek

one girl's journey - a la folie

I drink a lot of coffee and talk a lot of sass. it's all just fodder for the tell-all.

Where it's clever to read Young Adult!

the blog of a bookish, nut-allergic girl